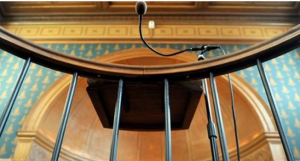 This is no longer science fiction. A cousin of Hal 9000, the famous computer of Discovery One, the spaceship from “2001: A Space Odyssey” is assisting lawyers in the law firm Baker Hostetler specializing in  bankruptcy. The news was hitting the headlines, as they say, in the press and on the legal planet. Prediction becomes reality. Some have long announced this change brought about by the introduction of technology into the legal market (Julie Sobowale, Aba Journal, April 1, 2016).

They do alert us to the necessary transformation and its consequences on the legal market (The Boston Consulting Group, Bucerius Law School, January 2016).

If some are delighted with this sudden introduction of cybernetics in the world of legal business, others are roused or are vocal against it: “how can legal services, intellectual operations if anything, be automated or even be entrusted to the machine?”

On the way of an augmented lawyer?

However it seems it is no longer a time for argument. This time is over as the technological phenomenon imposes itself on the legal industry, as described by Daniel and Richard Susskind (Daniel & Richard Susskind, The future of the professions, Oxford, 2015, p.66 and 104). Given an acceleration in business, the impatience of ultra-connected customers and the pressure on prices, there is no other choice but to reconcile the practice of law with technology.

From then on, robots, drones, artificial intelligence, platforms and algorithms all powered by  omniscient big data, complete the traditional legal toolkit of statute books and jurisprudential  law. It seems that the introduction of these new technical tools brought about a change in legal practice, enriching the lawyer with new “prostheses”, which transform him into a kind of “augmented lawyer”.

There is no question here of transformism nor of pleading for the emergence of a hybrid jurist-machine being, but of looking at facts, or should we say, data in the face: the augmented lawyer would be this legal practitioner, backed up in a consubstantial way, in the resolution of legal issues, by the dynamic combination of algorithms and the machine, both of them fed continuously by the updated knowledge of bigdata.

By the compounded effect of information collected continuously and an exponential capacity for analysis made possible thanks to algorithms, the mental faculties of the lawyer seem to increase. The aim is for the legal practitioner to fulfill a threefold objective: anticipating apprehensions, making his action more efficient and more secure. In a word, the issue is to remove farther away uncertainty in the decision making process, or even to guide more effectively the supreme prerogative of exercising professional and managerial responsibility in the analysis of its consequences and the management of risk.

Let the word to the legal machine!

Concerning the use of technology in the legal business, the question arises of the reliability and trust which are the essence of legal advisory activities and decision-making. Technology is now seen in a positive outlook and favorably a priori. It offers, through networks and big data, immediate access to a complete, up-to-date and relevant digitalized legal knowledge: laws, case law, opinions, precedents, consultations and even legal doctrines are now all available, information which can thus, in real time, be collected and analyzed anywhere around the world.

Indeed, on simple digital request, the information sought is then proffered in the form of a guided suggestion, or an appropriate response to the case. Both of them are performed in a pre-digested format, free from slipshod or loose answers, thanks to the corroborations of the computational systems carried out with the help of algorithms.

Availability, real time, completeness are the keywords of this technology. It seems so efficient, so powerful that we could wonder, like well-known French professor of Law and Philosophy Jacques Ellul, whether there is still a need or a place for lawyers if “in front of man, there is another being capable of doing all that man did but more quickly and efficiently” (Jacques Ellul, Le Système Technicien, Le Cherche Midi, 1977, p.105). In a word, in legal advice or in decision-making processes, the natural attitude could tend towards the following reactions: “let’s look at what the machine suggests to us”, “listen to what the results of data processed by  algorithms show”,  “Let’s let the robot manage and see what happens”: in a word, let the word to the deciding legal machine!

Legal practice based on big data…for what value?

But, giving the machine a free hand in such a way, doesn’t it mean giving consent to a sort of implicit license to decide, interpret, suggest and guide in place or in lieu of the lawyer, on the basis of technical solutions that are presumed reliable because they are included in a veracity of legal-statistical data?

Thus, a kind of practice “delegated” to technology would interfere into legal practice, which implicitly, entails a dispossession of the legal practitioner. Indeed, if technology achieves an enhancement of the lawyer’s capabilities in analysing and understanding, this enhancement cannot be controlled by him, simply because technology, by essence, escapes him: technology exceeds his capacities of apprehension and calculation of certain elusive realities; technology also exceeds his understanding of the digital codes and forces him to trust its result. Then, technology could supplant the law by a “code is law” principle (Lawrence Lessig, Code Is Law, On Liberty in Cyberspace, Harvard magazine, 2000) and omniscient big data (Viktor Mayer-Schönberger, Kenneth Cukier, The Data Revolution is on The Move, Robert Laffont, 2014, p.25), which grant technology a sort of performative power and authority that can leave the lawyer by the wayside …

There is a danger of “uberisation” of the legal practice (uberisation du droit, www.laloidesparties.fr, January 28, 2016) : in legal advice or in the decision-making process which would only be based on the machine and the behavior of corroborated big data. What about a contentious strategy whose argument would solely be based on the logical continuity of constant jurisprudence, established as a total and exhaustive result of the judicial decisions produced by the machine, without taking into account the factual reality of the legal situation?

Such a practice would simply be ethereal. Indeed, drawing conclusions from a very large number of corroborated data, even if they are exhaustive or complete, leads to a decision which is made on an inductive basis, which is more of a “signal” than of a causal rationality. However it is the latter by connecting facts and events to their causes, which validates legal decision-making!

Sticking to the machine and data’s results to reduce uncertainty without reflexive balancing, leads to risk a substitution of a deductive intuition based on data flows for legal reasoning. What kind of legal truth can arise from this data? What legal truth can thus validly arise from such a situation “inter- mediated” by data collected according to a logic that is beyond any law and that is escaping it?

A truth that probably resembles that of these prisoners, seated and chained in Plato’s cave, who behind the fire do not know how to distinguish real objects from their shadows projected by other men whose existence they do not even suspect (Plato, The Republic, Book VII, 514a1-517a7) …

All elements plublished in this blog are protected by copyright. Any reproduction in whole or in part shall be priory authorized and shall always mention the sources meaning: the author and www.bindingcontract.eu  2018. Any unauthorized use may be subject to prosecution.